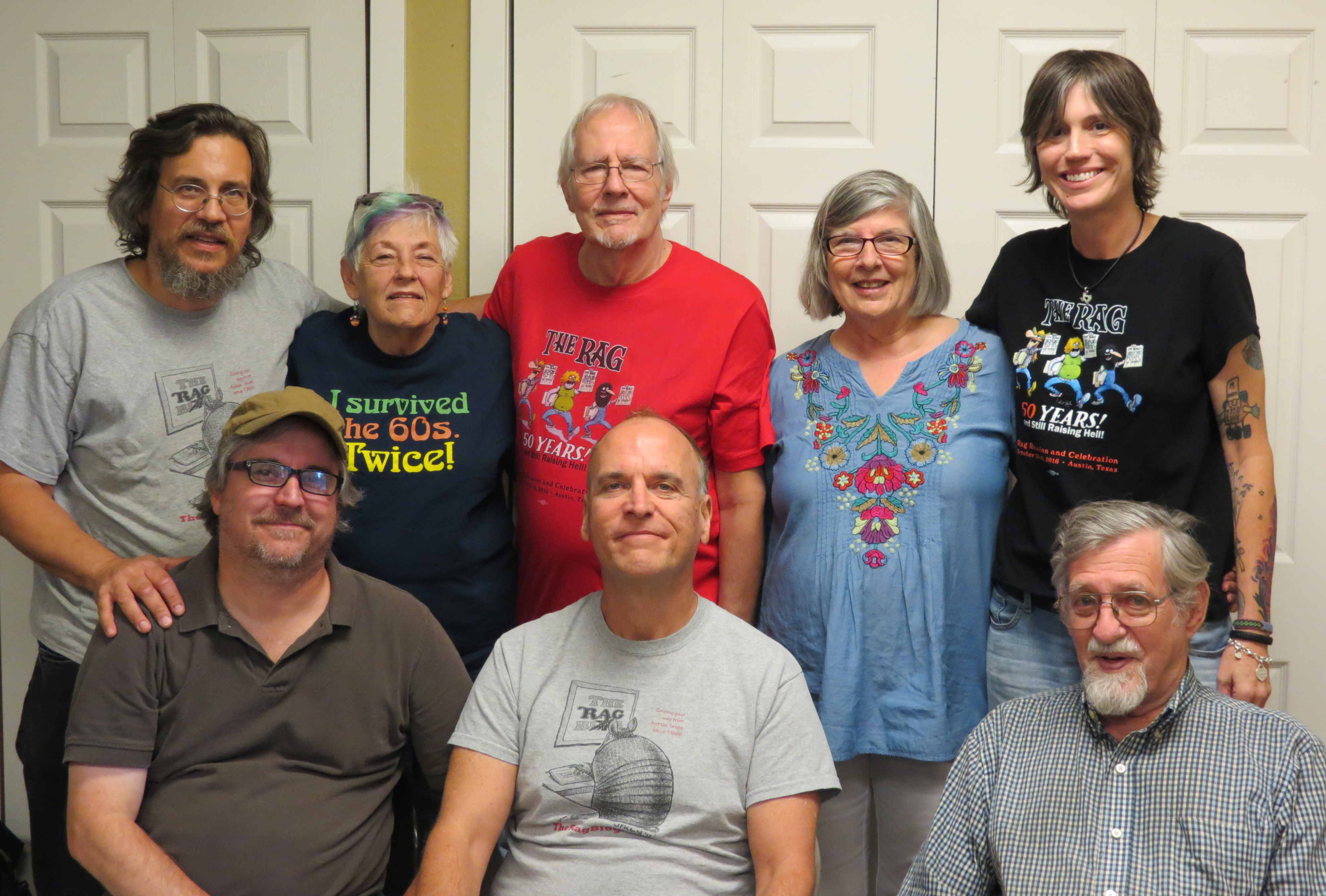 On the occasion of our 10th anniversary, Thorne Dreyer, Alice Embree, Tracey Schulz, Suzy Shelor, Roy Casagranda, and Roger Baker discuss our first decade of Rag Radio programming. Plus some history of The Rag, Austin's legendary '60s-'70s underground newspaper, and its digital-age rebirth with The Rag Blog in 2006 and Rag Radio in 2009.
Also featured are highlights and snippets from former shows with guests including Dan Rather and Robin Rather, Bill Kirchen, Margaret Moser, Bill Ayers and Bernardine Dohrn, Eddie Wilson, Tom Hayden, Bernie Sanders, Roxanne Dunbar-Ortiz, Bill Minutaglio, Paul Krassner, Jim Hightower, and Powell St. John.
Photo above of the Rag Radio gang. Top row, from left: Roy Casagranda, Beverly Baker Moore, Thorne Dreyer, Alice Embree, Suzy Shelor. Bottom row, from left: Tracey Schulz, Allan Campnell, Roger Baker. Photo by Charlie Martin / KOOP Radio.
Rag Radio is produced in the studios of KOOP 91.7-FM, an all-volunteer, cooperatively-run, solar powered community radio station in Austin, Texas, in association with The Rag Blog and the New Journalism Project, a Texas 501(c)(3) nonprofit. It is streamed live on the Internet at KOOP.org and Radio Free America. The host and producer of Rag Radio, Thorne Dreyer, is a prominent Austin-based activist and writer who was a pioneer of the ’60s underground press movement. The show’s engineer and co-producer is Tracey Schulz and the staff photographer is Roger Baker; Suzy Shelor is Rag Radio associate; Alice Embree is guest host; Glenn Smith and Roy Casagranda are our political analysts, and Evan Hearn is the Rag Radio apprentice. The syndicated show is broadcast (and streamed) live Fridays, 2-3 p.m. Central) on KOOP, and is later rebroadcast and streamed on WFTE-FM in Mt. Cobb and Scranton, PA., on Houston Pacifica's KPFT HD-3 90.1, by KKRN, 88.5-FM in Round Mountain,  CA, and at WALHRadio.com in Wilmington, OH -- and as a featured podcast at Veterans Today. Learn more about Rag Radio here.
Running time: 55:37
Contact:  ragradio@koop.org.

Reviewer: Josefina M - favoritefavoritefavorite - September 25, 2020
Subject: Your Sep. 25, 2020 Rag Radio Show
I'm a frequent listener of KOOP radio and I have participated in several KOOP radio shows. I just listened to Phillip Russell's interview about Mexico and would like to make some observations. As a Mexican sociologist I'm always interested in what people have to talk about my country. As much as I appreciate Phillip Russell, I was disappointed by some of his comments which were very critical of AMLO. Russell talked about all the flaws of the Mexican president without analizing the pros. i.e. the airport in Texcoco. He just mentioned the 2 billion spent during the past administration wiithout considering the reasons behind AMLO's refusal to continue with the project : the unstable foundation of Texcoco (a former lake which has currently been flooded during the rainy season) and the opposition movements from the local residents. He didn't mention either the increase in workers' salary when AMLO became president and the redistribution of wealth that he's aiming for, besides targeting corruption. Also he didn't consider the state of affairs that AMLO inherited from 5 decades of neo-liberal policies besides corruption, impunity, and blatant and increasing inequality of more than 2/3 of the Mexican population. Obviously Russell is only considerng the economy and investment as some of the main indicators of development without the inclusion of other important ones such as social welfare, and the redistribution of wealth. This speaks of the capitalist point of view & background that pervades his comments, which unfortunately is also part of the North American culture. I wish there were more balanced contributions on Mexico as a whole. Salud y paz, Josefina